Boxes, Beverages for Folks on the Front Lines

Across the country, people are helping their communities get through the coronavirus epidemic by putting their skills and resources to good use. Neighbors are helping neighbors by sewing masks out of T-shirts, turning their front lawns into food banks, cooking meals for front-line workers.

In Ohio and Missouri, two beverage bottlers, G&J Pepsi-Cola and Ozarks Coca-Cola/Dr Pepper, have been part of the fabric of their communities for almost 100 years. So when the coronavirus hit, they were looking for ways that their workers and resources could help out.

St. Stephen's Community House has been part of the Columbus, Ohio, community as long as G&J, helping families weather tough times since 1919. The community organization knew the virus would create a need for more than the usual amount of free meals they distribute to families. Volunteers prepared the meals for delivery and WestRock, a packaging company in Lancaster, Ohio, donated 5,000 new cardboard carrying boxes to hold the meals. But St. Stephen's had no way to transport the donation to their facility. 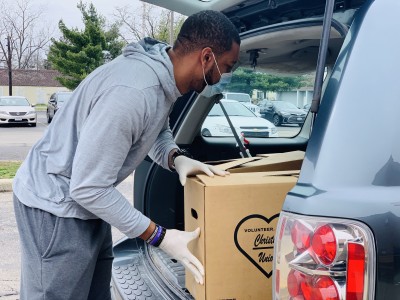 Marilyn Mehaffie, CEO of St. Stephen's, picked up the phone and called Duffy Driscoll at G&J Pepsi, which had a longstanding relationship with St. Stephen's and had helped them out in the past.

Less than 24 hours later, a G&J truck pulled up to St. Stephen's with the 5,000 boxes. St. Stephen's typically distributes 1,000 meals a month, but the day of the box delivery, they provided over 700 meals to families in need.

"Without support from all these people this wouldn't have happened," said Natalie Atkins at the St. Stephen's Community House. "G&J opened their hearts without question to make a three-hour round trip to pick up and deliver the boxes and without them I don't know how we would have been able to do it."

G&J, which had been donating hundreds of cases of beverages to shelters, food banks and first responders, said it's all about helping the people who are taking care of their community in a crisis. 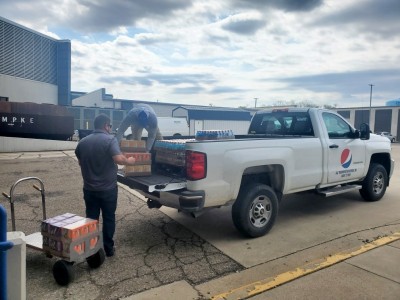 "Anytime an organization like G&J takes a minute to recognize what our organization means to the community, it gives us a heartwarming feeling," said Wendy Yarborough of the American Red Cross, which G&J had provided with donated beverages.

Recognizing the contributions of people on the front lines is what prompted Ozarks Coca-Cola/Dr Pepper Bottling Company in Springfield, Mo., to look for ways to show its appreciation for its hometown heroes.

Employees who needed to stay home as the virus spread set about to create a list of places where first responders were dealing with the immediate needs caused by COVID-19. They quickly identified 193 locations, including ones in hard to get to rural parts of Missouri.

"All of us at Ozarks Coca-Cola live our mission to 'bring sparkling moments of refreshment to everyone in the Ozarks,' said Sally Hargis, Ozarks vice president and chairman.

Other beverage makers joined the effort, including sports drink maker BodyArmor, and Monster Energy, with the idea of delivering donated beverages to people working in emergency services.

Peter Berg of BodyArmor said, "We knew that what Ozarks was doing was making an impact on these people, and we just wanted to do our part. It's the least we can do for these people on the front lines." 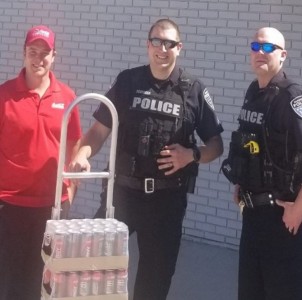 Together, they've delivered more than 800 cases of beverages to nearly 7,000 first responders across the region in a gesture of support and thanks for the hard work and dedication to the community of those on the front lines.

"Especially in a time like this when we are restricted in what we can do, we can't walk into a convenience store like we normally would, it's huge for us to have these donations right here in our department," Salem Police Chief John Chase said. "Sometimes we lose track that there are really good people out there and to know that they care is huge."